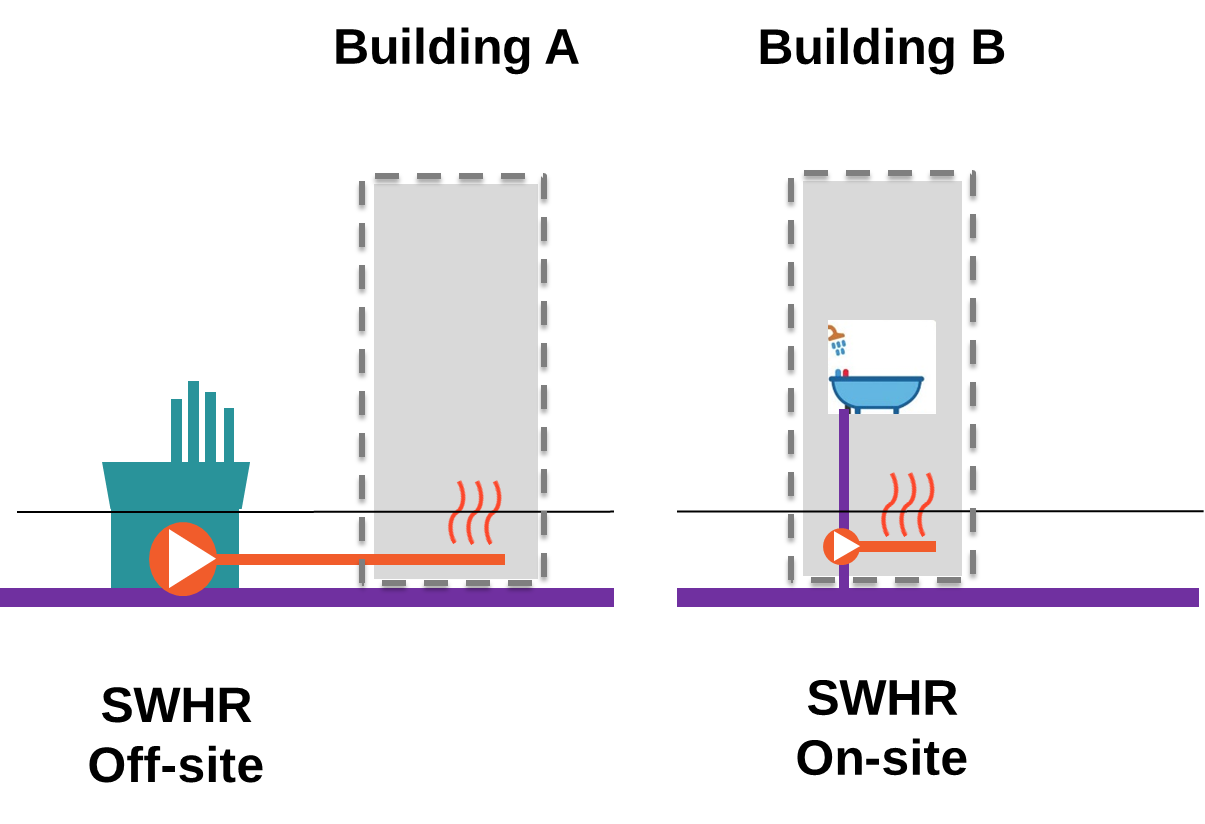 If the two systems produce the same amount of energy at the same efficiency, their environmental impacts are identical from an energy use and carbon emissions perspective. However, under some building energy modelling guidelines, such as ASHRAE 90.1, no benefits are recognized from off-site energy sources. Many building codes reference modelling guidelines such as ASHRAE 90.1 to demonstrate compliance, so these codes wind up ignoring benefits from any off-site energy sources.

This is important (at least in dense areas) because off-site solutions could offer economies of scale, professional management, and better performance (e.g. higher utilization rates or different classes of equipment because of scale and greater diversity of loads).

The new BC Step Code is another example of a code that does not recognize off-site energy measures. The Step Code has requirements for on-site energy use, but does not recognize the energy and climate benefits of upstream efficiency measures or renewable energy supply. In some cases, this will result in solutions that are higher cost to the end user but provide little or no incremental environmental benefit. And it may hinder the development of renewable district energy systems.

Meeting Step Code requirements will require on-site measures, even when off-site measures can deliver deeper emissions reductions at lower cost. New developments may not be able to absorb the costs for both on-site systems as well as the cost to develop new thermal networks, which may result in buildings choosing to only go with on-site systems only to comply with the Step Code. Codes that do not allow the flexibility to choose between on-site or off-site measures to realize energy and climate objectives may be closing off options for cheaper and deeper carbon reductions at the neighbourhood scale.

LEED: The CAGBC and USGBC developed a DES Interpretation Guide that provides guidance to energy modellers to recognize the attributes of off-site energy solutions. By recognizing off-site energy sources as eligible measures to satisfy the energy requirements, they have resolved the boundary issue.

City of Vancouver Zero Emissions Building Plan (ZEB): The ZEB addresses the boundary issue in two ways. For the Greenhouse Gas Intensity (GHGI) requirement, energy modellers need to use the carbon intensity of the primary energy source, regardless of where the energy is generated. For the Total Energy Use Intensity (TEUI) requirement, they provide guidance to modellers to treat renewable energy supply as zero energy input to a building. This means that regardless of where the renewable energy is generated – inside the building, or inside a DE system that the building connects to – the attributes of the renewable energy are recognized within the code. ZEB still has some limitations in terms of how off-site energy efficiency measures are recognized however, but this refinement appears to be in process.

City of Toronto Zero Emissions Building Framework: Similar to ZEB, Toronto’s framework has a requirement for GHGI that does not discriminate against where the energy needs of the building are generated. Focusing on carbon emissions eliminates the boundary issue. Toronto has taken a step further than Vancouver’s ZEB to provide energy modelling guidelines that acknowledge the attributes of off-site energy systems when calculating the TEUI.

If policy makers are looking to optimize for the deepest carbon reductions, at the lowest cost to end-users, we would suggest adopting a code that resolves the boundary issue, or adding energy modelling guidance to address the issue. Focusing on primary energy and/or greenhouse gas outcomes from primary energy also addresses the boundary issue. Yet another alternative would be to apply the boundary issue code or standard in a way that recognizes this limitation. An example of this may be requiring a less stringent level of on-site performance in areas where off-site energy solutions exist.

This is an evolving conversation. Many policy makers have realized this shortcoming. Contemporary, carbon-based codes like the City of Vancouver’s ZEB and City of Toronto’s Zero Emission Framework have addressed this issue (with some refinements needed for ZEB). LEED has been there on this issue for almost a decade. Others like ASHRAE have recognized the limitation, and are actively working to change the modelling guidelines. Yet, other codes like the BC Step Code remain as outliers, and steadfast in suggesting that, though the atmosphere can’t tell the difference, there is only value in having energy efficiency and renewable energy measures inside the building, not outside the building.

We welcome comments on this or other posts in the series. Stay tuned for future posts and drop us a line if you’d like to be on the distribution list alerting you to new posts.