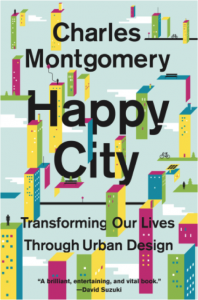 In his book, Happy City: Transforming our Lives Through Urban Design, Vancouver urbanist, Charles Montgomery, argues that the happy city, the wealthy city, and the low carbon city can be the same place. He describes how the social and energy connections created by living closer to one another can create benefits to well-being, the economy, and the environment.

… We don’t need grand architectural metaphors to solve the challenges posed by human settlements. Real power lies not in singular objects, but in the sinew and systems and invisible relationships that run through everything from emotions to urban geometry to energy distribution. We have only begun to understand the potential for these overlapping systems, but we do know that when regular people and city builders alike embrace the inherent connectedness of city life, when we move a little closer, we begin to free ourselves from the enslaving hunger of scarce energy. We can live well and save the world at the same time.

An example of this phenomena that Montgomery provides comes from the Olympic Village in Vancouver. The social energy that converges in this high density urban development goes beyond metaphor. The heat from the development’s waste water, with the assistance of heat pumps, serves as the low carbon heat source for the development. Both the social, and energy connections in the Village are possible because of the decision to live closer to one another.

Part of this is nothing new – living closer to where we work and shop can lower our carbon footprint. We can all see clearly how if we walk or bike, if we live in smaller spaces, then we’ll emit less carbon.

But the new big idea is that how we design our cities can actually nurture happiness. Cities are not just places that generate wealth, or that facilitate sharing of resources and cost effective infrastructure, they can also be engines for positive well being.

The take away here is that we can design our cities to create overlapping social, economic, and environmental benefits. It is not enough to look at just one end to justify the means of city building – that is, we must not look solely at the social, or economic, or environmental outcomes. We need to identify these co-benefits to reinforce why we live in cities, and recognize that we can create the happy city and the green city within the same place.